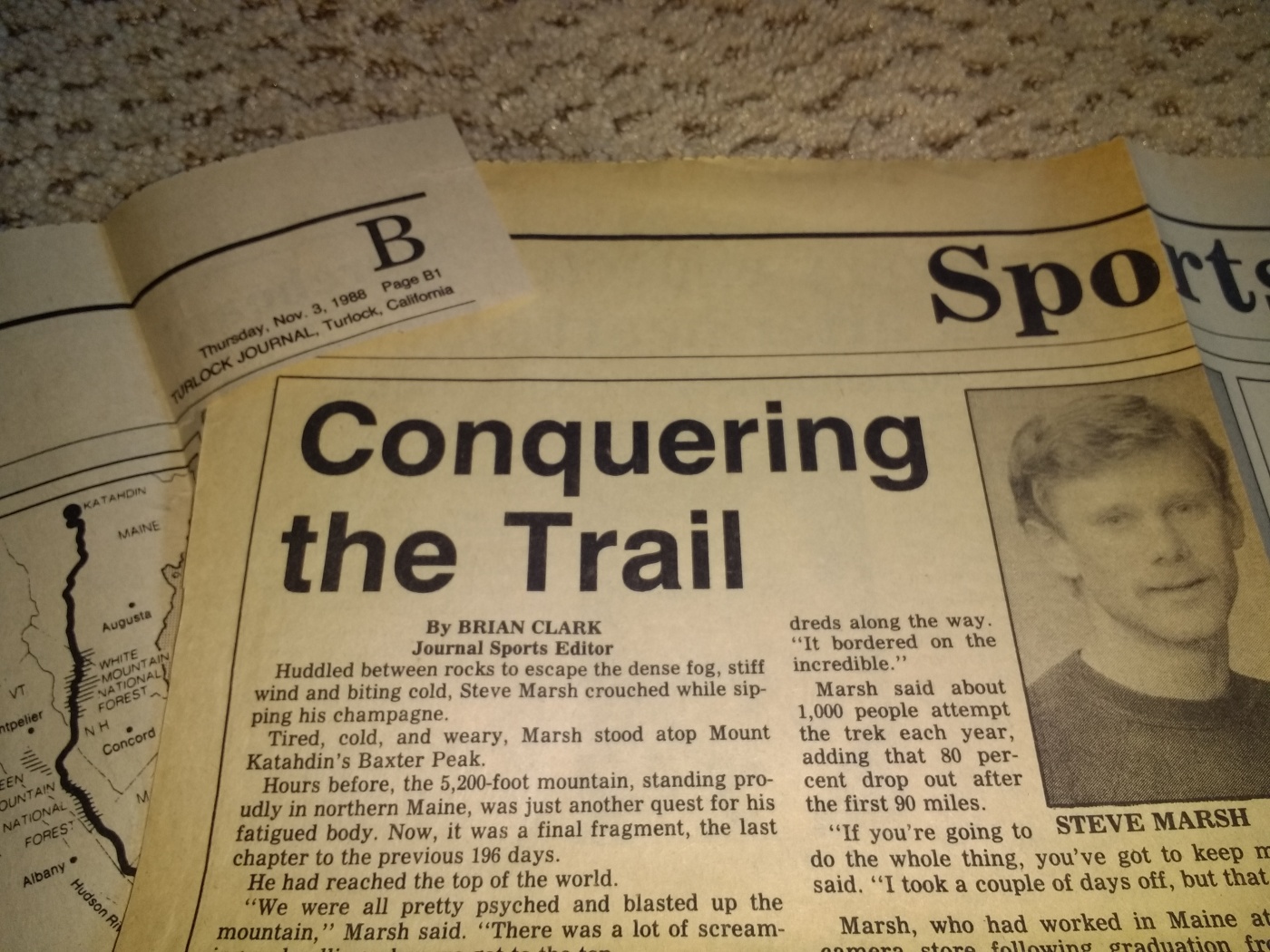 This story comes from the summer of 1990. We were not yet engaged and still having a long-distance relationship. Steve was working as an archaeologist in Groveland and living in the barracks at the Groveland Ranger District. I was living with my parents at home, going to school in Modesto, and working as a toddler teacher in Turlock. We were both very busy and only saw each other every other weekend.

We talked on the phone as much as our pocket books could afford; shooting for at least once a day. It was during one of these conversations that we discovered we had yet another thing in common: scrapbooking. I was telling him how I created my own binders out of cardboard and then filled them with drawings, newspaper clippings, magazine photos, and all my dreams and hopes. It was something I had started in high school and continued just for me. I never let anyone know I had these books. I was kind of embarrassed about them really. I never showed my sisters, or any friends.

Steve told me he loved making photo albums and also put his hopes and dreams into them. He was slightly advanced from me because he had tons of artistic talent AND had actually lived a bit more. His pages were filled with stories from college, documentation of his hike of the Appalachian Trail (AT), and photos from many eastern states.

We decided that we wanted to share them with each other. We planned to bring them all together on our next weekend. I was still very embarrassed, because mine were homemade. But I wanted to share everything with this man. So I sucked it up and drug them from the bottom of my locked cedar chest.

Steve started with his college photo album. He showed me all the funny things he did with his college pals. There was the TastyKake vs Twinkie Showdown, tons of flyers he has created for events in the dorms (it was a paid position he held on campus), and then all the funny themed parties put on by Sigma Mu Mu (ΣΜΜ) the made-up frat he and his friends created. Their mascot was the spitting llama! I was so jealous of his college experience.

I was next. I started with one of mine that was filled with clippings of movie advertisements and stars. Of course, there were several pages devoted to Harrison Ford and Indiana Jones. My heart-throb! I joked, not for the first time, that I actually found my Indiana Jones and was never gonna let him go. Then we looked over pages of Spielberg movies and even all the Star Wars movies.

Now back to him. He pulled out his AT binder and began showing me postcards and timelines. He had some photos, but mostly letters from other people he met on the AT. There were a few maps and lots of inspirational quotes from people like Frost, Shakespeare, and even song lyrics. Then, close to the back of the book was an article from the Turlock Journal of November 1988. It featured him!

I was dumbfounded! I quickly reached for another one of my books and frantically thumbed through the makeshift pages until I came to…..The exact article!!! I had read and clipped it and stuck it in my dream binder! Next to it I wrote, “This guy is Awesome! And cute too!!”

Holy crap! We just stared at each other for about 10 seconds with the look of surprise and amazement on our faces. Then I giggled. He reached over, and grabbing me, pulled me into the biggest hug, followed by the most passionate kiss ever. Then we looked at each other again, and we both giggled like school girls with a secret.  I said, “I forgot that I clipped this. I didn’t realize it was you!” “Now you have to marry me, Nancy Firestine,” he said. “I’m apparently your dream come true.”

Huddled between rocks to escape the dense fog, stiff wind and biting cold, Steve Marsh crouched while sipping his champagne. Tired, cold, and weary, Marsh stood atop Mount Katahdin’s Baxter Peak. Hours before, the 5,200-foot mountain, standing proudly in northern Maine, was just another quest for his fatigued body. Now, it was a final fragment, the last chapter to the previous 196 days. He had reached the top of the world.

“We were all pretty psyched and blasted up the mountain,” Marsh said. “There was a lot of screaming and yelling when we got to the top. It was incredible.”

Incredible was the journey he had just completed, a 14 state, 2,100-mile hike across the Appalachian Trail. Stretching from northern Georgia to northern Maine, cutting a swath through the Atlantic seaboard, the Trail provides easterners with their own Yosemite.

The 1982 Turlock High graduate began the trek at Springer Mountain in Georgia on April 7. Averging about 13-15 miles a day, Marsh hit Katahdin on October 20.

“You really got back to the simple life,” Marsh said. “You had everything you needed on your back. It was very primitive. Everything was in black and white. If it was cold, you were cold. It is was wet, you were wet.”

The weather caused problems at times. During a three week stretch in Connecticut, it rained every day. “That was really disgusting,” he said. “Everything was wet and our clothes were getting moldy.”

The one conflict that Marsh had anticipated to be the toughest, loneliness, was never met. “I was preparing myself for being alone,” said marsh, who graduated with a bachelor’s decree in anthropology from Humboldt State in 1986. “But there were only about six days during the entire trip that I was alone.”

His fellow hikers were the one aspect of the trip that Marsh said he’d never forget. “The one thing that surprised me was the generosity of the people on the trail,” said Marsh, who met hundreds along the way. “It bordered on the incredible.”

Marsh said about 1,000 people attempt the trek each year, adding that 80 percent drop out after the first 90 miles. “If you going to do the whole, you’ve got to keep moving,” he said. “I took a couple of days off, but that was it.”

Marsh, who had worked in Maine at a relative’s camera store following graduation from Humboldt State, found out about the popular hike in National Geographic magazine. After a year of pondering, he decided to leave his job and make the $2,000 investment necessary for survival. “The hardest thing was deciding to do it,” said Marsh, who’s now unemployed and living in Turlock. “The big thing was chucking it all away just to carry around a backpack for six months.”

With about 90 days to prepare–some people, he said, take up to five years–Marsh gathered equipment he used to use for his 8-mile backpacking trips during high school. He then bought about six months worth of food, packaging it in about 40-pound boxes–enough to last him 10 days–and made the arrangements to have them mailed to 10 various towns off the trail. “You have to travel as light as possible,” he said. “When I got the food boxes my pack weighed about 50 pounds. But then I’d usually eat about three days of food in the first day.” Marsh, who lost eight pounds during the trip, relied mainly on a freeze-dried diet, though he added, “I was a Pop-Tart guy” when it came to breakfast.

The trail, being close to many major eastern cities, wasn’t all squirrels and chipmunks. There were many hostiles and, if need be, one could walk off the trail and into a hot shower and restaurant dinner in a nearby town. At one point, while with 15 others along the trail, Marsh used a pay phone just off the Trail and ordered 11 pizzas at a local Pizza Hut.

“It was wilderness, but I wasn’t prepared for the people and the towns,” he said. “(The towns) were few and far between, but it was nice having them. Just when you were getting dirty and smelly, they were there to renew your sense of hope.” Marsh said that many locals along the Trail were inclined to lend a hand, including one woman dubbed the “Ice Cream Lady,” who always had a cone ready for weary hikers.

From the mountainous southern states, to the flat mid-section, all the way to New England, the Trail, conceived by forester Benton MacKaye in 1921, was home to Marsh for more than six months. “It was a feast for the eyes,” he said. “It was a thrill, challenge and an accomplishment. I gained a deeper sense toward my own willpower. I think I’m more environmentally conscious.”

One thought on “This Guy is Awesome! And Cute Too!!”